Be Internet Awesome with Ralph and Vanellope and be brave, kind, and strong! 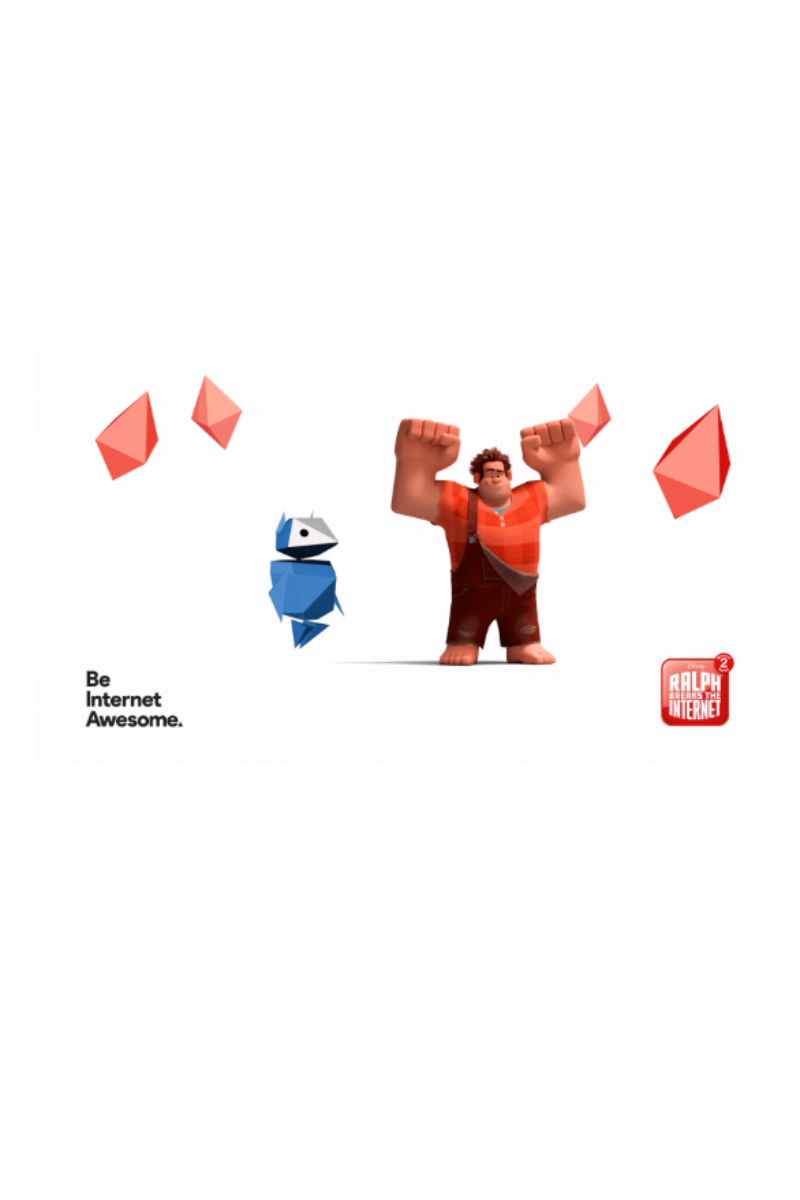 Like Ralph and Vanellope in Ralph Breaks the Internet, kids can find themselves in tricky situations when navigating the Web. Download activity pages at the link below that can help kids be Internet BRAVE, KIND and STRONG!

Walt Disney Animation Studios’ Ralph Breaks the Internet is collaborating with Google’s Be Internet Awesome program to encourage the fundamentals of digital citizenship and online safety for kids so they can explore the online world with confidence.

Be Internet Awesome and Ralph Breaks the Internet themed resources and digital tools, including internet safety tips, downloadable activity sheets, educator and parent guides and more, are now available at: g.co/BeInternetAwesome and https://beinternetawesome.withgoogle.com/en_us/families


Also, check out this film clip of Ralph and Vanellope when they arrive in the internet at:

Make sure to check out the social media channels for Be Internet Awesome!

Walt Disney Animation Studios’ “Ralph Breaks the Internet,” the animated adventure featuring video-game bad guy Ralph (voice of John C. Reilly) and fellow misfit Vanellope von Schweetz (voice of Sarah Silverman), raced to No. 1 opening weekend (the second biggest Thanksgiving opening of all time), winning the top spot at the domestic box office for three consistent weeks and grossing more than $435.1 million to date. In the hilarious, highspeed sequel to 2012’s Oscar®-nominated “Wreck-It Ralph,” the besties risk it all by traveling to the expansive, fast-paced world of the internet in an action-packed attempt to save Vanellope’s game Sugar Rush. “Ralph Breaks the Internet” is available instantly on Digital 4K Ultra HD™/HD/SD and Movies Anywhere Feb. 12 and physically on Blu-ray and DVD Feb. 26.

“Ralph Breaks the Internet” arrives home with a wide-range of exclusive extras, taking fans behind the scenes at Walt Disney Animation Studios to explore how artists created the film’s vibrant version of the internet — from comical cat videos to the intense online game Slaughter Race to shady characters on the Dark Net. Features also reveal some Easter eggs — inside jokes and references to other Disney films and characters hidden throughout the film — and filmmakers introduce some never before revealed deleted scenes.

Directed by Rich Moore (Academy Award Ò-winning “Zootopia,” “Wreck-It Ralph”) and Phil Johnston (co-writer “Wreck-It Ralph,” “Zootopia,” writer, “Cedar Rapids”), and produced by Clark Spencer (“Zootopia,” “Wreck-It Ralph,” “Bolt,” “Lilo & Stitch”), “Ralph Breaks the Internet” welcomes back favorite cast and characters introduced six years ago, including Reilly, who provides the voice of Ralph, and Silverman, who returns as the voice of Vanellope. Lending a virtual hand to Ralph and Vanellope is Shank, voiced by Gal Gadot, a tough-as-nails driver from a gritty online auto-racing game called Slaughter Race, a place Vanellope wholeheartedly embraces — so much so that Ralph worries he may lose the only friend he’s ever had. Yesss, voiced by Taraji P. Henson, the head algorithm and the heart and soul of the trend-making site BuzzzTube, makes Ralph a viral sensation. Jack McBrayer and Jane Lynch return as the voices of Fix-It Felix Jr. and Sergeant Calhoun, respectively, and Disney Animation’s good luck charm, actor Alan Tudyk was called on to voice a search engine named KnowsMore — literally a know-it-all — who runs a search bar and helps Ralph and Vanellope on their quest. Lots of exciting cameos are also featured in the film including a scene that reunites all of the original (living) Disney Princess voice cast.

“Ralph Breaks the Internet” will be packaged and released several different ways, offering families the flexibility to watch the movie instantly and on a variety of different devices of their choosing. The film is available in Digital 4K Ultra HD, HD and SD and physically as a 4K Ultra HD Combo Pack (4K Ultra HD, Blu-ray and Digital Copy), a Multi-Screen Edition (Blu-ray, DVD and Digital Copy) and a single DVD.

About Be Internet Awesome
Be Internet Awesome is Google’s multifaceted program designed to teach kids the fundamentals of digital citizenship and safety so they can explore the online world with confidence. The free program is available in English and Spanish and consists of an  ISTE standards aligned curriculum, ready-made Pear Decks for each lesson, Interland – an adventure-packed online game about digital safety and citizenship, and a family guide for families to continue the conversation at home.

About Ralph Breaks The Internet
From Walt Disney Animation Studios comes the 2019 Oscar®-nominated, action-packed adventure  Ralph Breaks the Internet. In the hilarious, high speed sequel to Wreck-It Ralph, besties Ralph and fellow misfit Vanellope risk it all by traveling to the expansive, fast-paced world of the internet in an attempt to save Vanellope’s game Sugar Rush. They’re in way over their heads, so they must rely on the citizens of the internet—including Yesss, the head algorithm and heart and soul of the trend-making site BuzzzTube, and Shank, a tough-as-nails driver from the gritty online auto-racing game, Slaughter Race—to help them navigate their way.

Ralph Breaks the Internet is now available instantly on Digital 4K Ultra HD™/HD/SD and Movies Anywhere and physically on Blu-ray and DVD.